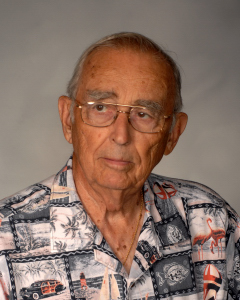 Howard H. Pinkley “Mayor of Point Place”, 85, was taken by the Lord on September 1, 2012 to help organize the activities of Heaven. He was born in Toledo, OH on April 20, 1927 to Harold C. and Carrie L. (Kerchevall) Pinkley who welcomed him into Heaven.

Howard was a faithful patriot and served courageously in 2 branches of the Military; Navy and Army. His country is forever grateful for his service and his sacrifices. Howard was the beloved son of Point Place and worked diligently to preserve the history and to keep advancing its attributes so that the residents of Point Place would prosper. Howard was very instrumental in the development of; the Point Place Lighthouse, the Nautical Village Walkway and the Howard Pinkley Landing for canoes and kayaks.

Point Place was his dearly loved home. He did everything in his power to make sure she was never forgotten and always held in high esteem. Point Place grieves for her loss for the empty shoes Howard left behind which will never be filled with the spirit and determination that Howard had. In 2004, First Lady Laura Bush ventured into Flags Sales and Repair to meet Howard and before she left hugged Howard and thanked him for his gracious hospitality that he was famous for.

Contributions in Howard’s memory will be to Messiah Lutheran Church or Shriners Hospital. Those wishing to leave a kind word, a fond memory or photos for the family to receive may do so at www.jasinfuneralhome.com He touched so many lives, he changed so many things, his passions were contagious, and his memory is forever. Sail on Howard, sail on.

There are no upcoming events.